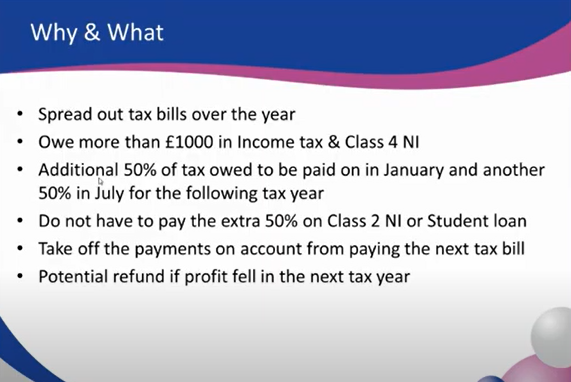 So the idea being is it will spread the load and HMRC get their money in effect earlier than what they would normally do, but it does make the assumption that your profits are exactly the same in year two as they were in year one. So you have to owe more than 1,000 pounds in income tax and Class 4 National Insurance. They don’t take into account Class 2 NI or your student loan.

If you have other income that is taxed at source, for example a PAYE job, and 80% of your tax bill is covered by that PAYE income, you will not have to make this payment on account because they know they’re going to get the money out of you somehow by PAYE. You will still have to pay your tax bill, but at least you don’t have to find that payment on account.

So it’s 50% upfront in January and 50% upfront in July. Now, it is possible to reduce the payment on account that comes out of the calculation if you think your profits have dropped in the next tax year. Now, obviously, at the moment a lot of people’s profits have dropped, so we could turn around and say, “Yes, we’re going to reduce the payment on account.” This can be done within the tax return itself, as there is an option for reduction in payments on account, or you can go into your own government gateway and there is a button there to say, “Reduce the payment on account.” Personally, I prefer to do it within the tax return itself because that then is reflected normally 72 hours after we’ve put the tax return in, whereas the button in the government gateway can take several weeks for it to get processed through, and if you’re doing it close to the payment date it might not go through in time to reflect the change in payments.

There is a separate video on how to do the reduction in the payment on account if you need to do it. There is a provisor with reducing the payment on account, is if it turns out your tax bill showed that you should’ve made the payment or you should’ve made the full payment, then HMOC will charge you interest on the money they did not get back to the time they should have received it. And there’s always the possibility is they might turn around and say, “You’re not keeping proper accounting records. Therefore, here’s a fine. Thank you very much.” Unless you can provide reasonable excuse. So it’s an idea to keep a log of where you are with your income and expenses so you can easily justify why you think there will be a payment on the account that could be reduced.

So that’s the crux of where you are. Now, there is a possibility you could get a tax refund. If you do put your tax return in, let’s say April, May, or June, and it turns out your taxable profit has reduced in year two, potentially you can either get the July payment reduced… It will never go up. Don’t panic. It will never go up. So if you make more profit in the year, the July payment stays the same.

But the potential is if you have made less profit and therefore your tax bill is less, the July payment could come down. And if it turns out you don’t have to make a July payment, you might even get a refund on what you paid in January. So it is a lot of jiggling around with figures, and sometimes it’s kind of like, “Okay.” But it’s good to know that potentially you could get a refund. Okay. Now, one thing the HMRC system does not tell you: When you do your tax return for the year, it will tell you how much your future payment on accounts are, but what it won’t tell you is what payment on account you have already made for that tax year. They expect you to remember that. So when it comes to paying the January tax bill, don’t forget to take off the payment on account you’ve already made if you’re just looking at the calculation.

But again, if you do your tax return early enough, if you log onto your government gateway then you’ll find out it will have adjusted how much you have to pay in January for the payments on account already made. So just keep an eye on that account. So 36,500 pounds minus 9,500 pounds taxed at 9%. That gives a bill of 2,430 pounds. You also have a tiny bit of Class Two National Insurance. That is subject to a different video to go through exactly what Class Two National Insurance is, but it is compulsory over a different threshold. So that’s three different thresholds you’ve got to know about. It’s 158.60 pounds for the year. So what you’ll see is she has to pay 7,388.60 pounds by the 31st of January. Woo-hoo! She’ll be really excited, however then you have this 50% payment on account. Now, as I said before, it is only based on income tax and Class 4 National Insurance.

As I said, it doesn’t base on the student loan and we’ve assumed Anna doesn’t have any student loan, otherwise her figures go up for January. So that’s where those numbers come from. It’s 50% of your income tax and 50% of your Class 4 National Insurance all added together for the January tax bill, and then you get an extra 50% in July. So always, always, always try and do your tax return before the end of June, and then hopefully then HMRC can rework. And if you can get a repayment on your January prepayment on account from the year before, woo-hoo!